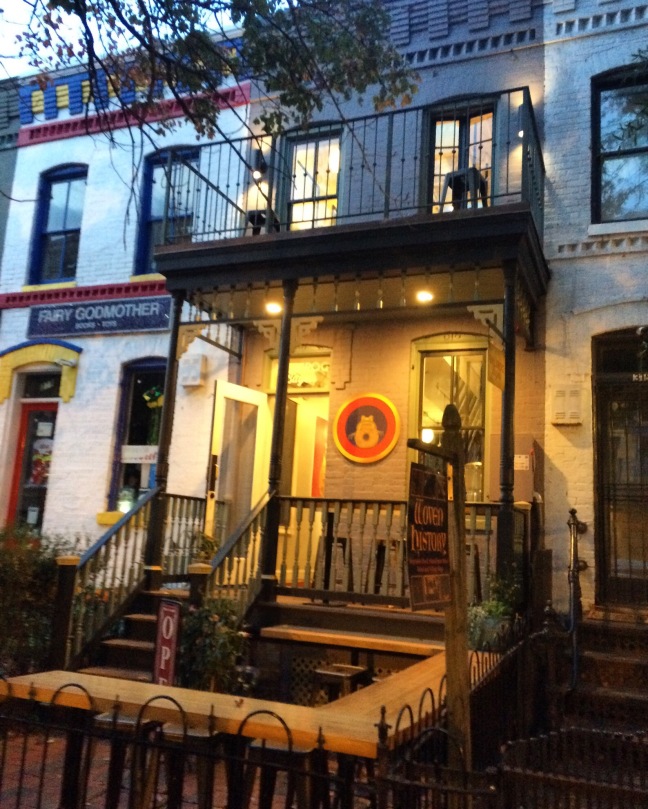 As with the 2015 Challenge, this year’s event coincided with my trip to Washington, DC, for the Annual Meeting of the American Intellectual Property Law Association. Thanks to the mercy of Rule #4, I was able to make full use of the opportunity to combine a coffeeneuring ride with a chance to meet up with the Women & Bicycles Coffee Club. Andrea was kind enough to schedule a meet up for that Thursday, a day when I didn’t have to be at the conference until 9:00. Of course, the Thursday Coffee Club meets at Eastern Market, and my conference was in Woodley Park, not exactly close by.

But it’s supposed to be a challenge, right?

So I mapped out my route and gave myself extra time to walk from my B&B to the nearest bike share station. This meant heading out at 6 a.m., well before the sun comes up. Having come in from the west coast, it feels more like 3 a.m., but I’m tough like that.

Being on a mission made the cool darkness part of the fun. Having to get across town meant using one of my favorite bike lanes – the scenic ride down Pennsylvania Avenue, with the colorful sunrise and the Capital dome before me. Unfortunately, the ride was very rough, as the asphalt has been stripped and the transitions between stripped and unstripped sections, at every intersection, were quite rough. I alternated between taking the lane with car traffic and bumpily working me way along the bike lane.

It was an exhilarating ride for me. I loved rolling past famous buildings: the National Archives, the Smithsonian along the mall, then onto Constitution Avenue and right alongside the Capitol and the Senate office buildings, the Supreme Court. To do this ride in the early morning, as the sun was rising, felt magical.

Once east of Capitol Hill, I turned south a few blocks to Eastern Market. I found the bike share docking station and walked through the picturesque market area and found my destination, Bullfrog Bagels.

I made it to Bullfrog Bagels on time! I had coffee and a breakfast bagel, and, once I remembered that I needed to look for the group upstairs, joined these lovely women, two of whom visited Los Angeles this past Spring. You can read about the inaugural Women + Bikes + Coffee meet ups with Elisabeth and Andrea, seated across from me here, in this post.

The only realistic way for me to dash back to the conference hotel in time for the first meeting of the day meant turning this into a multi-modal adventre. So I hopped on a subway at Eastern Market, transfered to the red line, and got back to Woodley Park just in time! It’s amazing how deep beneath the bowels of our nation’s captial one can travel. Here’s my view coming up the loooong escalator back to street level.

When I participate in CicLAvia, I usually like to bring along both of my Nantucket Basket Panniers, one filled with samples of my Bikie Girl Bloomers (never know when I’ll wish I had them with me), and the other with a floral display (just because). This time, I tried adding some Bikie Girl stickers to help advertise, but I think I need a bigger sign.

First things being first, I went straight to my coffee shop: Alchemist Coffee Project. This seemed the perfect choice for today’s coffeeneuring ride, as it was conveniently on my way to the First Unitarian Church, where I wanted to catch the service before joining the CicLAvia fun. I have been curious to try this place, as I often pass it when taking the 7th Street bike lane towards downtown Los Angeles. I was also curious to try this place since noticing it had taken the spot formerly known as the Bourbon Street Cafe, where I had been many times. I have a special place in my heart for Bourbon Street Cafe, as this is where all the first meetings happened back when the plans for Bikie Girl Bloomers were first being hatched.

Once I saw the “New Orleans Cold Brew” on the menu, I knew that had to be my drink. Having recently been to New Orleans, where I was reminded how much I like the taste of chicory coffee, it was a no-brainer. I was quite happy with my choice. Both the drink and my pastry indulgence were delicious.

The interior was appealing, with plenty of tables and interesting decor.

After church was over, hubby was waiting out front to meet up with me and head for the CicLAvia route. The McArthur Park hub was just a few blocks east on 7th Street.

We followed the route into downtown and onto Broadway. Please note the awesome shirt hubby is wearing. It reads: “I never dreamed I’d end up married to a sexy cycling lady, but here I am, living the dream!” You’ll never guess who got that shirt for him.

Hubby capturing the action on Broadway

We continued along Broadway into Chinatown, where we joined a party for volunteers and supporters of CicLAvia hosted by Blossom Vietnamese Restaurant. The food at Blossom was good – I think we will have to go back and experience the restaurant as regular customers.

From Chinatown, we rode back into the heart of Downtown and parted ways. Hubby headed back toward home, while I took the left turn onto 4th Street to explore the remaining part of the route. Along the way, I encountered the biking photographer, David G., who graciously obliged my request for a photo.

From the downtown hub, I followed the route over the 4th Street Bridge into Boyle Heights where the final CicLAvia hub was at Mariachi Plaza.

Once again, I ran into someone I know. This time, I was getting in positi

on to take a photo at Mariachi Plaza when I ran into James. We had just met at the New Urbanism Film Festival the weekend before.

I followed the route back toward McArthur Park and on home. Lots of variety packed into a simple coffeeneuring ride!